+ hard to die because you stay behind your Totems

+ Stun immune with over 25 Rage stacks

- Totem playstyle is not for everyone

First, we go to War-Bringer because this will be our main heal skill

After that we take the Aspect of Carnage and with the next 2 points from the Merc/Uber Lab we take Rite of Ruin to get the double bonus from our Rage stacks (picking Rite of Ruin at last helps us doing a smoother Ulab run for ourself, because of the lower degen from 5%. After the Ulab and Rite of Ruin we have 10% degen at max Rage stacks). 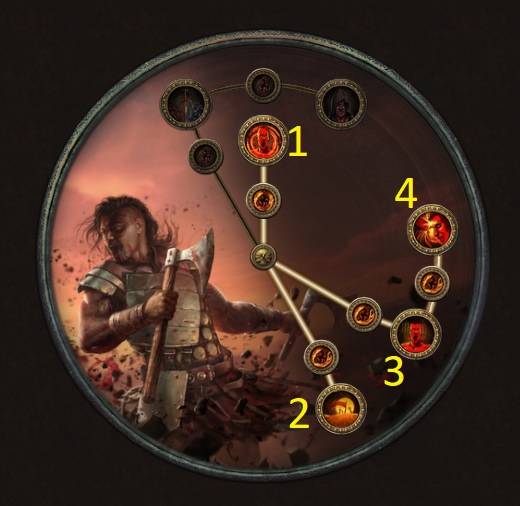 Help Oak - He gives us all we need: Phys dmg/reduction and life reg

Abyssus gives us the most adds # - # physical dmg to attacks ingame

The best and cheapest Armour for us is the Loreweave. This Armour gives us a huge DPS boost, some life and raises the max resistances up to 80% (and they are fixed, which means they can't go higher through flasks, but also can't go lower from map mods like -12% max res). The Belly of the Beast is the good alternative with around ~ +700 life

Switch Increased Area to Conc Effect for Hard Bosses. You can switch Faster Attacks with Ruthless if you feel you have enough attack speed (wich is also a dmg increase)

The best Major Pantheon for us is the Brine King wich provides free (almost) Stun Immunity:

You cannot be Frozen if you've been Frozen Recently

You cannot be Stunned if you've been Stunned Recently

150% increased Effect of the Buff granted by your Stone Golems

10% chance to Freeze, Shock and Ignite if you haven't Crit Recently

Regenerate 2.0% of Life and Mana per second if you were Hit Recently

10% Chance to Dodge if you've taken a Critical Strike Recently

10% increased Movement Speed if you haven't been Hit Recently

Remember: The best we can get is an on-hit corruption (Temporal Chains for defense, Elemental Weakness, and Vulnerability for Offence).

At lvl 1 take Ground Slam/Cleave/Molten Strike and the Ruthless gem.

At lvl 12 Take Sunder instead of you lvl 1 gem until you have the Warchief Totem (note: you cant use sunder with Facebreaker)

At lvl 16 take the Facebreaker. If you don't have some, pick a Rare/Unique 2Hand weapon with high physical Dmg (With FacebreakerIi prefer lvling with Infernal Blow + Melee Splash/Ancestral Call and Shield Charge).

NBA 2K21's MyTEAM mode has a lot of distinctive issues to do, but every thing revolves around distinctive currencies. You earn virtual money (VC) from playing NBA 2K21 regardless of the game mode. And also you can m...